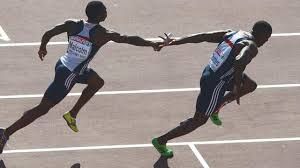 Season 2 of the “Optimizing – Leading Africa’s Digital Future” has the subtitle “Passing and Receiving the Baton”. History is a relay race in which we receive a legacy of knowledge and experience from those who have come before. We then enrich and grow this legacy until we ultimately pass it on to the next generation. Our analogy is that this legacy is like a baton in a relay race.

Season 2 of the Optimizing Podcast was launched on Monday 7th September 2020. The subtitle of Season 1 was “becoming the Grand Geek”. It focused on me (Barry Dwolatzky) and my own 40 year journey that has brought me to where I am today.

Season 2 has the subtitle “Passing and Receiving the Baton.”

I believe that one can see history as a relay race. We each receive something – a legacy of some sort – from those that came before us. We then run our race not only carrying this legacy, but (hopefully) growing and enriching it. Eventually we are ready to hand it over to the next runners – the next generation. In this analogy the legacy we receive and ultimately pass on is represented by the baton in a relay race.

Season 1 spoke about my own personal race, focusing on the work I have done in the world of computers and digital technology. I was born in the 1950’s which was the very dawn of the computer age. In the 1970’s as an electrical engineering student at Wits University in Johannesburg I began my fulfilling and exciting career working with computers as a researcher, lecturer, software engineer, innovator and entrepreneur. Over the past 40 years the baton in my hand has grown beyond the wildest expectations of my generation. In its current form the baton holds the promise to become something that has is being called “the 4th industrial revolution”. In the hands of the next generation this baton could be the key to humanity’s golden age, or the recipe for disaster and decline. Which it will be depends on how we hand it over, and the wisdom of the next generation.

In Season 2 I will be joined by a handful of the amazing people I’ve met in the course of my journey. Like me each of them carries a baton with relevance to Africa’s digital future. Each episode will focus on one of these people. I will again be joined by Kerryn Gammie, a young digital professional at the very start of her career.  Kerryn and I will ask each of our guests to discuss 3 questions. Firstly who are they and what have they done. Secondly what have been their most significant discoveries and contributions. And thirdly to give us a short list of the experiences and lessons that they would like to hand over to Kerryn and her generation.

I know that our second season of Optimizing will be just as interesting and valuable as Season 1.

In Conversation with Monica Singer

Optimizing is a podcast produced by Professor Barry Dwolatzky (also known as “The Grand Geek”). Season 2 features Prof Barry and Kerryn Gammie in conversation with thought leaders and role models in the South African and African digital community. Each conversation is based on the metaphor of a relay race in which the guest is asked to reflect on how they received the baton and what they will pass on to Kerryn and her generation [Evan Wigdorowitz (Edit and Logo Design); Callum Kuhl (Music )]